Our Support Your Confidence 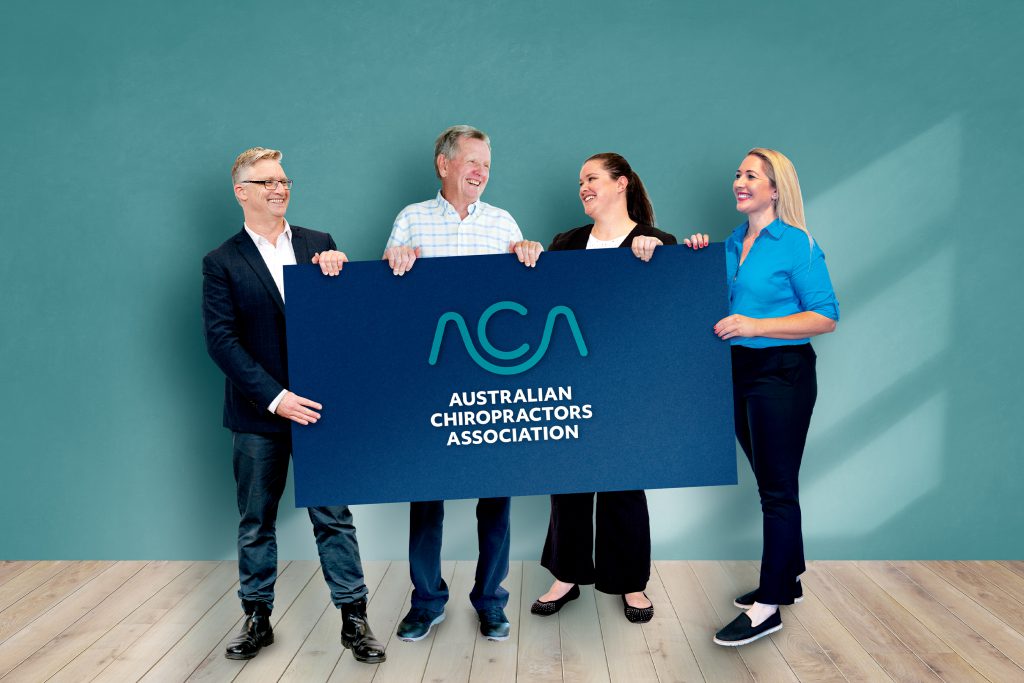 How the ACA’s support is giving chiropractors confidence in practice

Four years ago, the CAA was rebranded into the ACA, following the restructuring of a federation of nine entities into a single national Association. At the beginning of the rebranding process, the creative agency we engaged ran a workshop to better understand the Association as part of the creative process of developing a new brand.

The tagline ‘Our Support, Your Confidence’ was crafted from the common themes of supporting members and seeking to provide chiropractors confidence in practice, that flowed from the workshop. From this tagline, the logo was designed to show the chiropractor supported by the Association, and at the centre of all that we do.

Each year our membership renewals provide a great opportunity to reflect on the value of our ACA membership. On the back of a number of challenging years for the profession, we spoke with four members from around the country to look at how the Association supports them and discover what gives them the confidence to practice.

It was suffering a back injury as a gymnast in high school that caused Dr Natalie Clohesy to first seek chiropractic care. She was impressed and intrigued by the results and decided to become a chiropractor herself, as she desired to help people reach their health and wellbeing potential.

“I love helping people. To be able to make somebody feel better physically, mentally and emotionally, is what gets me to work every day,” Natalie reflects.

While studying her chiropractic degree, sport remained a passion of Natalie’s and she ended up volunteering her time providing chiropractic care at various sporting events. Natalie loved how chiropractic care could be applied across a diverse range of sports and applied in different settings whilst still being effective.

The Australasian Institute of Chiropractic Education (AICE) was launched in 2019 and brought the ACA’s various interest groups together to foster advanced learning pathways. For Natalie, being part of AICE Sports & Exercise allows those with an interest in sports and exercise to promote their clinical competencies and translate research and knowledge into practice.

“Becoming a member of AICE Sports & Exercise was a conscious decision to be surrounded by other like-minded chiropractors who share the same professional skill sets and to support and collaborate with each other. AICE provides professional recognition for the expertise in these fields, and that’s going to strengthen our profession.”

Natalie graduated from Murdoch University in 2011 and was awarded the ACA’s ‘Graduate of the Year’ award, nominated by university lecturers and clinic staff in recognition of her grades and clinical excellence.
Moving back home to Queensland, Natalie opened Northside Chiropractic Clinic, a multidisciplinary practice in the Brisbane suburb of Aspley.

Practising within a health precinct, Natalie works collaboratively with different healthcare providers, seeing herself as part of a team that works together towards the same goal of looking after a patient.

For Natalie, confidence in practice comes from collaborating with peers and mentors and being supported by organisations like the ACA.

“The ACA is a really well-rounded organisation that you can come to for support in all different areas. I appreciate the marketing tools the ACA provides us to be able to promote chiropractic in our community and within our own practices.

If I ever have any questions related to running a practice, we can contact the ACA and get further information.” Natalie continues her pursuit of knowledge by undertaking a PhD through CQUniversity. Once completed, Natalie hopes to be able to teach the next generation of chiropractors.

Building the Evidence Base

When Dr Aron Downie finished high school, he sought to become an electrical engineer but three years into his studies, he found himself becoming more interested in health and biomechanics.

Aron announced at his twenty-first birthday celebrations that he would switch to studying chiropractic, much to the surprise of his engineering friends, and he hasn’t looked back since.

“The mechanics of how the body functions and how health works intrigued me. I thought chiropractic was a natural fit, being a sort of ‘engineer of the body’. The chiropractic profession seemed natural to me,” Aron recalls.

Aron always had an interest in research, subscribing to a number of research journals under the assumption that is what all practitioners did. Aron would also get together with a group of other professionals, including physiotherapists, pain management specialists and GPs, to talk about through clinical scenarios.

A few years into practice, Aron faced some health challenges which limited his ability to practice full time. Discontent with only practising part-time, it was suggested that he try teaching and in 2001 Aron commenced as a lecturer at Macquarie University.

In addition to lecturing and practising part-time in his home city of Wollongong, Aron is active in building the evidence base for chiropractic. Aron serves on the ACA’s Tertiary Education & Research Committee, is part of the ACA-funded Chiropractic Academy of Research Leadership (CARL) program and has recently commenced a new research project.

“My current research is all about screening people with low back pain for possible pathology as primary contact clinicians. Macquarie University, in partnership with the ACA, have come together to help fund this research project conducted with researchers and clinicians from the University of Oxford.”

To achieve this, the research team will be utilising a UK database of four million patients who have presented for back pain. These patients will be linked to a national cancer registry to see if they have later developed cancer. This will be the first study to use a nationally representative sample to address screening for cancer in patients with back pain.

For Aron, confidence in practice comes from being evidence informed. He is greatly appreciative of the ACA’s role in supporting the next generation of students and funding research, including providing scholarships that have allowed researchers to take time out of practice to help build the evidence base.

“I’ve been an ACA member since my first year of practice in 1995. It’s very important having a professional body to support you as a clinician and I believe all graduates should be a member of a professional association.”

Looking to the future, Aron seeks to build broader networks with other professions and researchers around the world, seeing this as the key to creating better research projects.

Starting Out in Practice

Working in a medical microbiology lab became quite monotonous for Dr Clare Halpin. Struggling with the limited interaction with others and wanting something more hands-on, she decided to become a chiropractor because of her own great experiences.

Upon completing her RMIT University chiropractic degree at the end of 2019, Clare decided to continue studying and commenced her Honours the following year. Halfway through 2020, Clare landed her first job as a chiropractor and moved to New South Wales during the height of Melbourne’s lockdown.

After six long weeks, Clare eventually had enough. Feeling overwhelmed, she knew she would get great support from the ACA, so decided to pick up the phone and call.

“I was in tears when I called, and the staff member assured me that what I was experiencing was not ok. I felt taken care of and it’s comforting to know that the ACA team welcomes you with open arms.”

In addition to the emotional support Clare received, she was connected to the ACA HR Service, who walked her through the contractual issues and legalities.

Clare moved back to Melbourne and got to complete her thesis and graduated with Honours. With the situation now behind her, Clare works across two practices, thoroughly enjoying the chiropractors she gets to work under and alongside.

For Clare, confidence in practice comes from the high-quality education chiropractors receive and the colleagues she gets to work alongside. Additionally, Clare credits the ACA for being there to support the profession and also the individual member.

“I would highly recommend any new graduates, or any chiropractor for that matter, to be an active member. You don’t think you need any help when nothing’s going wrong but when something goes wrong, you will need their support.”

Clare aims to open her own practice one day. With an interest in research, she would love to do a PhD and possibly even give back to the next generation by teaching chiropractic in the future.

Sport has always been an integral part of Dr Noel Patterson’s life. An injury while playing representative sport led him to see a chiropractor. Not knowing much about the profession, he was impressed by how quickly and efficiently the chiropractor resolved his injury.

Originally set on becoming an orthopaedic surgeon, he ended up doing radiology. After six years of working in emergency departments, Noel decided to become a chiropractor and left for the United States to study at Palmer Chiropractic College. Towards the end of his studies, the chiropractic profession and his passion for sport began to align.

“Sports medicine had just emerged in America but was yet to in Australia. With my sporting background and having had nearly every injury that ever existed, I thought that this is the perfect place for me to go,” Noel explains.

Noel moved back home, eventually settling down in Perth, and was the first chiropractor in Australia to have a sports qualification. In the early 1980s, he founded the ACA’s Council on Sports Injuries and Performance, which would later become Sports Chiropractic Australia and now AICE Sports & Exercise.

Noel assisted in setting up approximately 30 sports councils around the world and was the President of the International Federation of Sports Chiropractic (FICS) from 1990 to 1994. It’s easy to see why Noel is affectionately known as the ‘father of sports chiropractic’.

Over the years Noel has sat on various state, federal and international boards and had audiences with influential people including Prime Ministers, the Pope and Archbishop of Canterbury, but it’s giving back through humanitarian work that is most important to him. One of the initiatives close to his heart is Hands on India.

“We started off in probably one of the worst slums in the world. When we first got there, there was no education or healthcare. Now we’ve had over 700 children be educated and had over 3,000 women come through our empowerment programs.”

For Noel, confidence in practice comes from a confidence in yourself. He also believes it’s important to see where the profession has come from and where it’s heading, with the ACA a key part of that.

“Every chiropractor should be a member of the ACA, and if you’re not, you’re not getting a lot of things that you deserve to get. Without the Association, we wouldn’t be included in health funds or workers’ compensation schemes. All of these things that you can now take for granted were not always there; they came from sheer hard work from a lot of people over the years.”

Noel’s heart is broken by the reality that 20,000 children die each day from preventable diseases worldwide. His focus is now ‘The 3P Plan’, which stands for peace, poverty and pollution. For more information on this initiative, visit the3pplan.com

Now more than ever we need a strong membership base as we continue to advocate for the profession. We ask you to reach out to your colleagues, encouraging them to support the Association that supports them.
Your membership is not only a powerful investment into your career but into the future of the profession. We thank you for your continued support and hope that our support continues to provide you confidence in practice.