ACA Members Admitted as Fellows of the International College of Chiropractors 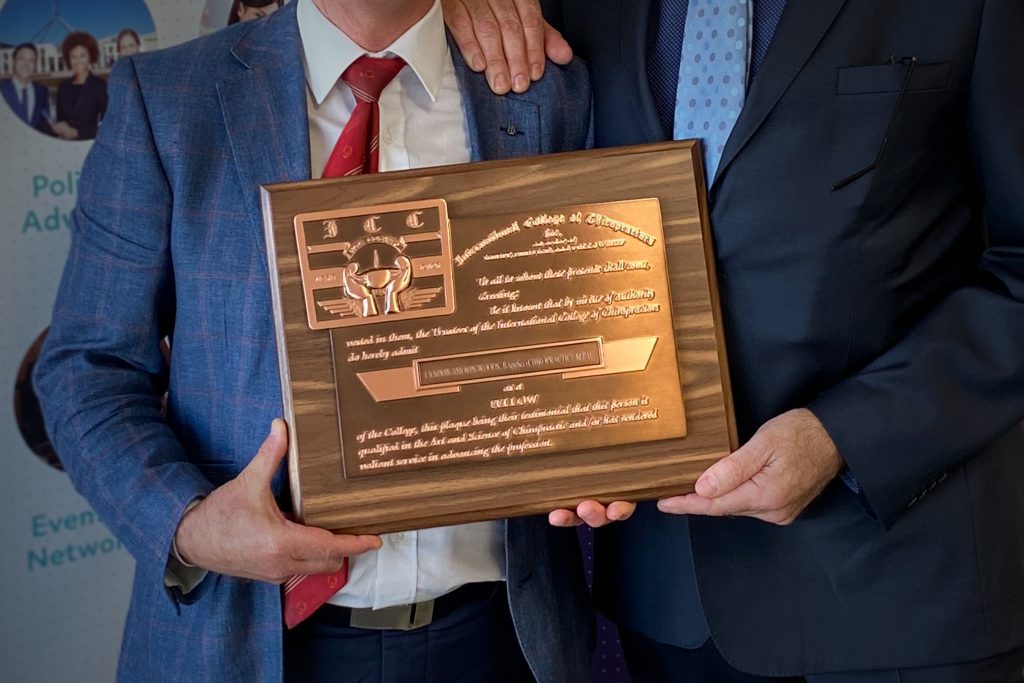 It is a pleasure to announce that Drs Peter Rome and Lyndon Amorin-Woods have been admitted as Fellows of the International College of Chiropractors.

To celebrate the magnitude of this achievement, ACA President Dr Anthony Coxon was fortunate enough to present the award to Dr Rome in person (prior to Stage 4 restrictions in Victoria), and Dr Amorin-Woods was presented his award by ACA Board Member Dr Warren Genders.

Drs Rome and Amorin-Woods receive these awards as recognition from the International College of Chiropractors for their contribution towards the advancement of the profession and their immense literature contributions over the years.

Dr Rome graduated from Canadian Memorial Chiropractic College (CMCC) Toronto, Canada in May 1969 and retired from private practice in 2010.

He has received various college and ACA awards and was a member of several ACA Committees as well as the Chiropractic Registration Board. Since 1991, he has authored or co-authored over 25 papers which are listed on the Index to Chiropractic Literature. Many of these published papers are related to the fundamental chiropractic tenet with eight papers on the topic of subluxation.

Dr Amorin-Woods completed his chiropractic degree at Phillip Institute of Technology in 1982 and has since practiced in a variety of settings. Since 2005 he has been a clinical supervisor, casual lecturer and placement manager at Murdoch University. These placements are situated in state health department hospitals, Aboriginal Medical Services and combined university health facilities across WA’s regional and remote regions.

In 2015 he completed a Master of Public Health at the University of Western Australia. From 2012 to 2018 he was a Director and Vice-President on the state board of the CAAWA and since 2014 represented the ACA as a member of the Australian Chiropractic Research Network (ACORN) steering committee.

He has authored and presented 24 published papers, three book chapters, 14 scientific podium presentations and seven posters around the topics of professional practice, evidence-based clinical decision-making for chiropractors and the role of complex research in chiropractic and manual care. In 2013 he received the Australian Chiropractor of the Year award, followed by the delegates award for a podium presentation at the ACA Conference’s Research Symposium in 2016. In 2018, he was awarded an interdisciplinary National Allied Health Award for contribution to Rural and Remote Health.

Congratulations to Drs Rome and Amorin-Woods on these monumental achievements in chiropractic.

Funding research is at the heart of the ACA and its core vision to ensure the profession reaches its highest potential. The ACA is committed to evolving evidence-based practice, including the integration of best available research and clinical expertise.

$2.1 Million to Research a New Model of Care

Macquarie University researchers at the Department of Chiropractic have been awarded $2.1 million under the Medical Research Future Fund (MRFF) scheme.

As we all know, chiropractors play an integral role in the healthcare system in Australia. The contribution made to the wider healthcare community and to the research base is vital in enhancing the stance of the profession and making an impact on the healthcare establishment.